Having a power source for van life or when you go boondocking is a fantastic way to get the most out of your van. Two types of generators are available to van lifers: gas and solar. Let’s take a closer look at their differences, pros and cons, and the best models you can buy now.

What Are The Differences Between Gas and Solar Generators?

With such similar names, you might think that gas and solar generators are essentially the same but with different power sources. But in fact, there are quite a few differences between the two, and each has its pros and cons. Let’s take a closer look at each.

Gas generators use fuel, like gasoline or propane, to provide power on demand. Because of the fumes they generate, gas generators need to be used outside. Alternatively, they can be run in a special compartment in your van that vents outside. Gas generators also generate a fair amount of noise.

Besides these downsides, gas-powered generators are capable of providing lots of power. Plus, they’re more affordable than solar generators.

Here are some pros of gas-powered generators for van life:

On the contrary, here are some downsides of using a gas generator for power:

A solar generator must first be charged before it can be used. Some solar generators have passthrough charging, allowing you to use it when it’s being charged. However, doing so is harder on the battery, and solar generator companies will warn of the impact of doing this. In addition to charging with solar panels, you can also charge a solar generator with other power sources, like a shore power connection.

Here are some pros of using a solar generator:

Let’s look at some downsides of using a solar-powered generator:

Gas vs. Solar Generators: Which Is Right For You?

Both gas and solar generators have their own unique advantages and disadvantages, so the right one for you depends on your situation.

A gas generator is likely better for you if you:

On the flip side, you might be better off with a solar generator if you:

Compact, portable, and powerful, the Honda eu2200i is one of the best gas generators on the market for van life.

The Honda generator provides 2200 watts of power and can run for over 8 hours on just under a gallon of fuel. This unit also runs quietly, generating only 57 dB(A) – slightly louder than a residential refrigerator.

The Honda eu2200i comes in a compact package for easy transport and storage (perfect for van life). It’s also smartphone enhanced, with service reminders, operation monitoring, and wireless stop available through an app.

The 200961 generators can run off gasoline or propane and provide up to 34 hours of power. So depending on your budget and fueling options, you can opt to run your generator off of 2 readily-available fuel sources.

At only 39 lbs, it’s one of the lightest 2500-watt generators on the market. This unit also runs quietly, generating just 53 dB(A).

The Champion Power Equipment 200961 is also ready-made to be run in parallel with another 2500-watt Champion generator for even more power.

The Jackery Solar Generator 1000 PRO is one of the most popular solar generators, and for a good reason.

This solar generator features a 1002-watt-hour lithium battery that can output 1000 watts of continuous power and 2000 watts of peak power. With three standard AC outlets, a 12v DC car port, two USB-C ports, and two USB-A ports, the Jackery 1000 can power various devices (even multiple at one time).

But what about charging? You can purchase the solar generator kit in two ways. The first is with two 80W solar panels, which can fully recharge the unit in about 9 hours. The second option comes with four 200W solar panels for 800W solar charging that will fully recharge the Solar Generator 1000 PRO in less than two hours in optimal conditions. Alternatively, it can be charged in 12 hours off a car outlet or in 1.8 hours off a wall outlet.

If you need more power, the best solar generator is the BLUETTI AC200P.

The BLUETTI solar generator provides a massive 2000-watt-hours of power with its lithium-ion batteries, providing 2000 watts of continuous power and 4800 watts of peak power. These numbers mean that the AC200P can power even large electronics like fridges or microwaves.

The BLUETTI AC200P provides plenty of outlets to plug into, including:

This solar generator also allows super flexible charging, combining different power sources for faster charging. With a 700-watt solar panel and a 500-watt AC connection, this generator can be fully charged in a mere 2.5 hours.

Both gas and solar generators are a great way to provide power while off the grid. Gas generators burn fuel to create power on demand, while solar generators must be charged first off of a solar panel or another power source.

Generally speaking, gas generators are cheaper and more powerful, but they create noise and pollution plus require regular maintenance. Solar generators are more expensive and less powerful but are eco-friendly, provide an entire solar setup with no installation needed, and require nearly no maintenance.

Whichever generator you pick, you’ll be sure to love the convenience of having power in your van.

Jennifer is a full-time RVer and part-time vanlifer. She is one half of DashboardDrifters.com and the founder of RVSpotDrop, a web service for full time RVers. 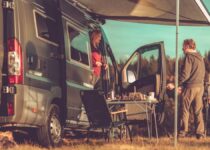 Camper vans are generally the cheapest type of RV, but there are a lot of things that affect the Class B RV cost. 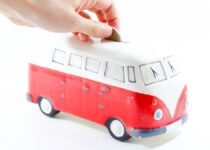 Considering van life? You probably have a lot of questions. The question we hear the most? “Is van life cheaper?” Here are our thoughts. Looking for a way to keep your clothing clean when you’re boondocking? Check out these off-grid laundry hacks for clean clothes.

1 thought on “Gas vs. Solar Generators: Which Choice Is Right For Your Van Life” 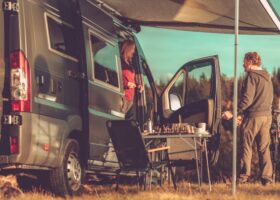 What Does a Class B RV Cost? 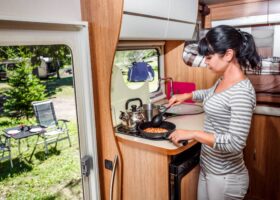 5 Easy Camper Van Recipes to Cook on the Road