A Road Trip to Alaska Is Jam-Packed with Plenty of Unique Views and Experiences.

The word Alaska means “The Great Land” and anyone who has ever seen or heard about the nation’s 49th state knows the name was properly chosen. Traveling to Alaska will provide breathtaking views of majestic mountain ranges, rolling sand dunes, treeless tundra climates, and massive forests, Alaska is also appropriately nicknamed “The Last Frontier.”

Van life is all about new adventures and new roads and a road trip to Alaska is jam-packed with plenty of unique views and experiences. With multiple ways to arrive in Alaska and ever-changing weather patterns, no two trips to this destination will ever be the same.

Before diving into all the various ways to arrive in Alaska, here’s a quick summary of the state itself. In terms of area, Alaska is the largest state within the U.S. In fact, it is larger than the next three largest states combined. If you combined Montana, California, and Texas, Alaska would still be larger.

Another way to explain the huge size of this cold state is to share its measurement in miles. 663,000 square miles, to be exact.

Best Times for Traveling to Alaska

The best time for traveling to Alaska is from May until September. This is the period of time that provides the best road and driving conditions, along with a greater chance of spotting wildlife. July is widely accepted as the best time to visit. Long days, fully accessible trails, active wildlife, and the warmest average temperatures are a few reasons many opt-in for this month to travel.

For those loving the colder weather, Alaska has a winter season that begins in October and wraps up in March. Temps and daylight hours vary from city to city, (more on sunshine hours later) with temps ranging from 5–30 degrees Fahrenheit.  Coastal areas are considered more temperate, with temps seldom dropping below 20 degrees.

The coldest month in Alaska is January, with an average temperature of 9.3 degrees Fahrenheit overnight. The first snowfall is usually recorded in October, with the snow season typically wrapping up in April. The state averages 64 inches of snow each year.

If departing from Washington State, plan on a drive time of about 43 hours. This 2,260-mile drive averages about six days, but for those wanting to take in all the scenery and local stops, allow more time to your drive schedule.

There are two main routes that run from Washington State to Alaska. One path is the Alaska Highway via Dawson Creek and the other is Steward-Cassiar Highway via Prince George. Both fully paved paths combine once in the Yukon.  Take note that there is a kilometer, and a few marked stretches on the Steward-Cassiar Highway that is currently not paved.

Another difference in Alaska is the amount of daily sunlight. There are fewer daylight hours during the months of August to April. Darker night skies are also the norm during this time frame.  The number of hours varies from month to month, and city to city. For instance, May 29th records a sunrise at 3:44 a.m with sunset at 11:49 pm in Fairbanks. However, in Juneau, sunrise is at 4:05 a.m., and a much-earlier sunset, 9:43 p.m.

To learn how much sunlight you will have access to during an upcoming trip, use this link to calculate sunrises and sunsets for most cities and for all months.

Alaska provides homes to more than 430 species of birds, with the largest count of bald eagles throughout the nation. There are over 70 varieties of mammals and the highest count of brown bears in the world.

Most popular for viewing is Alaska’s Big 5: Moose, bear, Dall sheep, caribou, and wolf.  Ocean mammals are just as visible and just as popular, ranging from gray whales, orcas, and humpback whales.

Moose can grow to a weight of 1,600 pounds, while their antlers can space up to six feet wide.  Kodiak bears can weigh just a bit less than the moose, with their top weight coming in at 1500 pounds. The height of these fluffy predators can reach 10 feet when they are standing upright on hind legs.

Sightings of wildlife are a common occurrence along the roadways and Alaska has made provisions for this. Instead of slowing down or parking in the roadways, there are special pull-over corridors within the roadways to provide a safe place to park for picture taking.

Also, while driving, it is important to remember that wildlife has the right of way. If a bear or moose is blocking the road, stop a good distance back from it. Don’t crowd it with your car or try to get it to move by slowly rolling forward. Pull toward the shoulder, a safe distance away, and give it time to move on. Take advantage of the wait by snapping some cool memento photos.

Places to Camp in a Van While Traveling to Alaska

Glacier Bay National Park and Preserve is located west of Juneau, in the southeastern portion of the state. Similar to most other national parks, this open season runs from May 15-September 15th.

It would be difficult to think of an Alaskan town that didn’t have at least one RV Park. A few popular ones outlined in Juneau include:

Use the RV LIFE Campgrounds and RV LIFE Trip Wizard to discover more campgrounds throughout the state of Alaska.

Alaska is very open to boondocking, statewide. Most highways have pull-outs, and boondocking is permitted. Keep in mind that many locations throughout the state don’t offer much more than a parking space. No amenities, no water hookups, just a place to kick back and relax.

Some places that offer a more remote location are:

Galbraith Lake Campground- Located just above Brooks Range in the North Slope region, this remote area is nearby the Arctic National Wildlife Refuge. There are 30 sites available.

Deadman Lake Campground offers fewer sites, but more amenities. Fire pits, vault toilets, a boat ramp, and some picnic tables are provided. Located about 30 minutes west of the US/Canada border, this is a great location for fishing or ‘shooting’ waterfowl with your camera.

Lakeview Campground is nearby Deadman Lake Campground and offers many of the same amenities, but with only 11 sites available.

Points of Interest when Traveling to Alaska

There are several interesting places to visit and sights to be seen while traveling to Alaska. Here are a few points of interest to add to your journey.

The Northern Lights are visible for an average of 243 days a year within the city of Fairbanks.  While visible during all four seasons, the best time frame to view is from August until April.

This is the largest glacier in the United States, measuring 27 miles long by four miles wide. It’s a scenic, two-hour drive northeast of Anchorage. Visits to this glacier can be done through a guide service, with options ranging from glacier tours, treks, and ice climbing.

There are 30 different mountain ranges in Alaska, with 17 making the top 20 list for highest mountain peaks in the United States.

The most difficult summit of NA’s high peaks is the St Elias Mountains which create the highest coastal mountain range on Earth. It covers nearly 44,000 square miles and is 300 miles long, and 90 miles wide.

A guide to Alaska wouldn’t be complete with some tidbits to keep in mind about this state. Alaska is home to:

Last-Minutes Tips, Reminders, and Advice for Traveling to Alaska

RV LIFE Trip Wizard has rest areas, national parks, public land, and private campgrounds listed in both the US and Canada. You can plan your route, estimate the cost of your trip, and have itinerary emails sent to you automatically. Trip Wizard also pairs with the RV LIFE app turning your phone into an offline RV safe GPS unit. Check out the RV LIFE Trip Wizard site to learn more!

Since 2007, Debra Pamplin has worn her freelancing hat proudly. Although she has written about music, parenting, and lifestyle topics over the years, travel writing has always been her priority. Her byline has appeared in numerous print publications and popular websites over the years. When not behind the computer screen, Debra can be found at one of the area beaches with her daughter, at a music festival, or out on the road discovering her next travel story. View her portfolio at www.clippings.me/debrapamplin The right insulation can make or break your campervan build. So, what is the best insulation for a camper van? Looking for a few good locations to camp? For the best van life Florida offers, let these 3 must explore places be your guide. Recovery gear for winter driving does not need to be expensive or take up valuable real estate on your van’s roof. 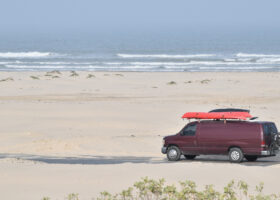