Be Prepared on Your Next Trip With Bear Safety Tips

Everyone who has camped or done any outdoor activity has heard about the danger of bears. These large predators eat just about anything they can get their paws on. Although they don’t usually seek humans out to attack them, it’s still a severe danger if a bear is on your campsite.

There are different types of bears, and you should approach them differently. Some are more aggressive, while others are easier to scare away. Identifying the bear at your campsite and responding appropriately can make all the difference in the world.

Your priority needs to be your safety, so be prepared to walk away from the campsite and let the bear do what it wants until you can call for help. You may lose some food and camping supplies, but it’s not worth the danger of a confrontation.

Below we’ll walk you through some bear safety tips, how to respond to different types of bears, and some preventative measures to make your campsite a less tempting target.

In general, bear attacks are less common than you might think. Bears tend to recognize humans for what they are and don’t hunt us on purpose. However, they have a strong sense of smell and are attracted to the food we bring to campgrounds. Even if something isn’t food but has a strong smell (like cleaning products or certain hygiene items), they might still be drawn to it.

There are some different tactics you should take when you’re facing down a bear. We’ll break down the differences between black bears and Grizzly bears below. However, there are a few general dos and don’ts you can keep in mind that should be helpful in any situation.

First, don’t try to run from any bear. Even if they weren’t interested in you, running away will trigger their instinct to chase prey. They are fast and can usually outrun you, so don’t try running away.

Instead, speak softly and slowly wave your arms. Don’t yell because this can agitate the bear further. If you talk to them, they will recognize that you’re human, not an animal they can hunt. Waving your arms will make you appear slightly larger and encourage them to leave.

You can also move sideways around the bear. This will help you keep your eyes on them while not running away. Don’t make direct eye contact because this could be taken as a threat. Just watch the bear closely, continue to talk, and circle around them until you can exit. You can slowly back away but never turn your back and run.

You also may have heard that you should climb a tree if a bear is nearby. This is terrible advice because most bears can climb trees just fine. You won’t be safer in a tree.

Finally, be prepared to surrender your camp to a bear if they won’t leave. Chances are, they’re just interested in your food. If you have the opportunity to get away and call for help, do it. Animal control, camp hosts, or park rangers can address the situation better than you. The bear may eat your food and damage your camping gear, but this is much better than them attacking you!

If you must stand against a bear, bear spray is your best bet.

Regarding firearms as a defense strategy, the NPS has the following to say, “Firearms are not recommended for stopping an attack. Using a firearm during a bear attack may only worsen the attack. An injured bear will be more aggressive, especially during a fight. It’s also harder to hit a charging bear with a firearm rather than bear spray, and a firearm can be dangerous to any hiking partners. While firearms have been effective at stopping an attack, they aren’t recommended.”

When dealing with a bear at your campsite, it’s crucial to know what type of bear it is. Black bears and grizzly bears are the most common types to find in North America. You might think you can identify them by color alone, but the names can be misleading. Both black bears and grizzly bears can come in shades of black, brown, red, blonde, silver, and white, so you can’t assume they will always look one particular way.

Features That Differentiate the Two

They can also both be pretty large. Black bears are around 5 feet tall when standing, while grizzlies are closer to 6-7 feet. So grizzlies are larger, but in the heat of the moment, you might not be able to make a clear judgment based on this alone.

Their body shapes are different, though. Grizzly bears have a distinctive hump above their shoulders. They also have long claws that are always extended and visible. Black bears lack the shoulder hump, and their claws are not usually visible from a distance. The ears are also a bit different. Grizzlies have small round ears, while black bears have more pointy, upright ears.

Once you know what you’re looking at, you can make better choices. Follow the tips in the section above, but if the bear doesn’t back off, you need to change tactics.

In the Event of An Attack

Grizzly bears are much more aggressive and will almost always win in a fight. If a grizzly charges/attacks you, playing dead is your best bet. Lay on your stomach. Keep your backpack on to protect you. Cover your head and neck with your arms and spread your legs, so you’re harder to flip over. Make no sounds, and be as still as possible. The goal is to become the least threatening animal in the woods. Grizzlies are more likely to leave you alone if they see that you’re not a threat. Do not get up immediately after the bear stops the attack. They may hang around for a bit so lay still for several minutes until you are sure they are gone.

Note: According to NPS, “Fighting back during an attack from a grizzly/brown bear will usually worsen the attack, but if the attack persists, then fight back with everything you have!”

Black bears are different. Instead, you should try to talk to them, wave your arms, and shoo them away. If they don’t leave, use bear spray. These bears tend to be skittish, so you can usually scare them rather than fight them. In the rare case that they attack, playing dead will not work. Fight like your life depends on it if you don’t have bear spray in a black bear attack. Use direct punches to the face or any blunt force weapons handy such as rocks or sticks.

On rare occasions, bears have treated humans as prey and stalked them. If you notice a bear is treating you like prey by following you at an increasingly closer distance and regarding you with curiosity, this may be a predatory bear. They aren’t reacting out of fear or defense. This bear is probably looking over the menu. Seek shelter in a car or building. If the predatory bear attacks you, fight back with everything you have (bear spray, rocks, fists, and any other weapons available) regardless of the bear type.

How To Keep Bears Away

The best offense is a good defense! If bears never enter your campsite, you’ll never need to have a confrontation with them. If a bear is at your camp, there’s a good chance that a strong smell drew them there.

Stay Safe and Be Proactive: It’ll Save More Than Humans

“For public safety, a black bear was euthanized yesterday in Grand Teton National Park.  The decision to remove the bear from the population was based on recent activities in which the bear exhibited no fear of humans and was approaching humans looking for food…the bear walked into an occupied campsite of a family with children and went directly to the picnic table and began eating the campers’ food that was set out. Park staff immediately responded to the scene. The campers were relocated to another site and the area was closed so the bear could be safely captured. The bear was trapped and killed Thursday evening. The female bear weighed about 60 pounds and was estimated to be about 1.5 years old.”

Remember that following best practices with food and scent-heavy items while camping in a bear country not only keeps you safe, but it keeps the bears safe as well. Bears all too often must be euthanized when they become a danger (too comfortable) to humans. When they are allowed to snack on careless camper’s leftovers and raid their ice chests enough times, they stop being afraid of humans. Unfortunately, our two species don’t coexist well, and bears at the picnic table equal injured pets and family members. The best way to be a friend to bears is never to get too close. 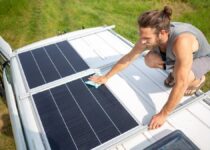 If solar panels get too dirty, they can lose some of their efficiency. This is why it’s a good idea to know how to clean RV solar panels. 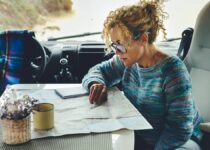 Traveling by van can be a fun experience. Adding these 7 van life must-haves to your road trip will provide more comfort and security. 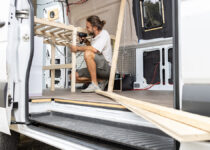 Many innovative companies have come up with various DIY van conversion kits to install into a van’s bare interior, including the following. 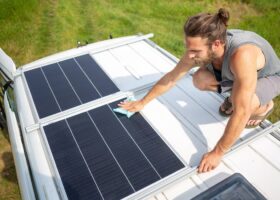 How To Clean RV Solar Panels 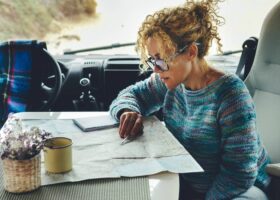 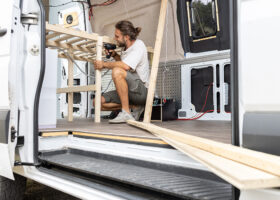 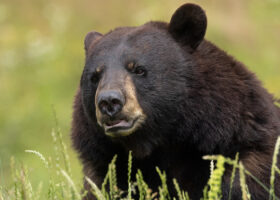 What to Do if a Bear is in Your Campsite